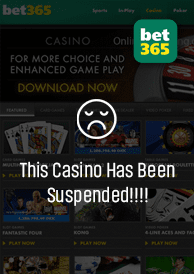 Game suspensions can occur for a variety of reasons. Sometimes it may be an individual account glitch. Other times it may be the website itself malfunctioning. Alternately, the suspension could occur due to gamer fault, whether unintentional or intentional.

When reviewing the complaints regarding Bet365 Casino, in particular comments regarding suspended accounts, several reasons can explain why such suspensions occurred, as outlined in the following sections.

Since one of the largest, longest running online platforms for gaming is Bet365, complaints regarding its services are not terribly surprising. Imagine just about any famous business or other establishment that you can think of, and now picture the review section on a given café or restaurant that you know is great. Sure, it will have some negative reviews, but which kind of negative reviews are the ones that should really be capturing your attention? The truth is, complaints like Bet365 attracts are not the ones to be most concerned about, especially after looking more closely at the claims regarding a frozen account.

However, A suspended account is one of the most common complaints about Casino Bet365 circulating on the Internet, along with the other issues mentioned in the previous section. One reviewer says specifically, "account suspended without relevant reason, no reply from casino," and Bet365 replied that complaints lodged were under review. In other words, all complaints will be examined, they just may not be resolved as easily as the complainer would like, particularly if gamer error was involved.

Some other entries make similar notes, with many of the Bet265 Casino complaints regarding a blocked account sounding quite similar; almost always, these complaints say "no relevant reason" for the suspension. Each of the complaints is dated to give a sense of when it occurred, and fortunately most of these complaints are from a few years ago. In addition, a closer scrutiny of some complaints reveals possible error on the player's part.

For instance, some complaints regarding a suspended account allege that they lost account access due to uploading some form of identification, such as a driver's license. Other complaints allege that accounts were lost due to changing countries. However, it is important to keep in mind that verifying one's identity and nation of origin are crucial steps for a legitimate gaming platform to take. Different countries have different gaming rules, and different casinos have different licensing authorities.

Bet365 Casino has been involved in the gaming world for an extended period of time; furthermore, since it primarily consists of sports betting, the platform is responsible to two different industries: sports and gaming. In addition, it is regulated in the UK and Malta, as well as by other appropriate authorities; however, this regulation does not necessarily mean that the casino can be used anywhere freely in the world.

Therefore, when considering complaints against Bet365 Casino, it is crucial to take them into context, as some of these issues truly may originate to player error, whether or not it was deliberate. For this reason, it is important to keep in mind the various ways in which you could avoid account suspension and ensure happier gaming for the foreseeable future.

In general, a suspended account is not fun to deal with, but it is also not an intractable situation either. People can sometimes engage in activities that inadvertently result in an account suspension, and this issue can usually be resolved if no serious foul play is involved. Furthermore, accounts may oftentimes be suspended due to player error, not nefarious behavior on the casino's part. For this reason, it is careful to look at complaints regarding Bet365 Casino carefully and critically.

It is critical to always adhere to the terms and casinos set forth by the casino, which do include minimum age requirements and do verify whether or not the casino is a legal platform in a user's country. Of course, some gaming platforms can be a scam, and these can usually be detected from a mile away; however, following terms and conditions closely can work a long way towards ensuring a safer experience for everyone. In addition, adherence to these terms and conditions would also reduce the chance of encountering any serious issues, such as loss of account access.

While complaints regarding Bet365 Casino are certainly not pleasant, they should not bar players from trying out the platform. After all, aside from complaints, Bet365 receives high praise from several players all over the world for its games, interface, and customer service. While the casino makes it clear that it wants all gamers to have an enjoyable experience, it also recognizes the reality of possible complaints with Bet365 services, even suspended account issues, which is why it preemptively addresses these complaints on one of its subpages.

Furthermore, Bet365 Casino addresses complaints directly through its website, as it has an entire section devoted to resolving complaints with Casino Bet365. Specifically, Bet365 Casino enables players to lodge a complaint via live chat, e-mail, telephone, web messaging, or even posting. The fact that Bet365 permits complaints posted illustrates the casino's willingness to work with players on major issues, including suspended account issues.

For complaints, Bet365 Casino requests for customers to provide their name, username, security number, and full, complete details regarding the complaint. All of these elements are necessary in order to ensure the most efficient complaint procedure possible; an absence of any information can result reduce the ability of Bet365 to resolve complaints promptly and efficiently. Whether it is a blocked account or whether it is a missing bonus, the complaints procedure at Bet365 is here to help.

Bet365 Casino addresses complaints seriously, and the platform makes it clear that all issues, including even a blocked account, will be closely examined with all the facts in mind. With this food for thought in mind, it is likely that you can have an enjoyable experience gaming without fears of a suspended account or other action that can comprise complaints at Bet365 Casino.